eNaira is more or less of the digital version of the Nigeria physical Naira. It is a Central Bank Digital Currency (CBDC) issued by Central Bank of Nigeria (CBN). The eNaira has thesame value with Naira, that is, will exchange 1:1 ratio. The eNaira is an electronic form of Naira, that is built on technology based on blockchain Technology which is centralized by the CBN, Unlike Cryptocurrencies that are decentralized.
It was launched in October 25, 2021 and 500 million of the eNaira were issued at launch. The new digital Currency is built on a distributed ledger technology (DLT), which is the basis of blockchain Technology.
Cryptocurrency is also built on the DLT, this is one of the major similarity between them.
This is first of its kind in Africa. Nigeria is the first country in Africa to adopt this technology. It is not the first-ever, countries like China, United Kingdom, Bahamas etc has adopted it in the past. Learn more about 81 countries that have adopted CBDC.
eNaira is built aiming to improve financial inclusion, encourage diaspora remittances and facilitate a more efficient and cost effective cross-border payment.
Furthermore, eNaira was developed by Bitt Inc., a Barbados fintech company responsible for the Digital Caribbean Eastern Dollar (DCash) issued by the Eastern Caribbean Central Bank. However, Bitt Inc. is allegedly registering as a company in Nigeria with CBN having a controlling stake in it as it did with NIBSS AND NEFT. This way it has a measure control over the company that developed its CBDC.
The eNaira is equal to the actual naira and it’s a liability of the Central Bank of Nigeria, making it safer that cryptocurrency.

eNaira is a Nigeria CBDC (Central Bank Digital Currency) developed using private blockchain based Hyperledger Fabrics, an open source DLT as a medium of exchange and a store of value in Naira. CBN is the only central legal entity that can issues the eNaira and it will circulate alongside the naira as legal tender in Nigeria.
Unlike Cryptocurrencies which is decentralized and the price is determined by supply and demand. CBDC doesn’t works that way, it is anchored by a value of a legal entity and centralized by an entity. For instance, CBN manage and control the eNaira.
So, you might be wondering that the money in my bank is already digitalised, and I can access them on my bank mobile app without holding any cash, what’s the difference?

Nigeria has one of the most Advanced infrastructure payment in the world. In general, the Central Bank of Nigeria issues two (2) type of money and provide infrastructure to support a third, the physical cash and electronic central bank deposit, which is also known as reserves or settlement balances.
The Central Bank Reserves is accessible by qualify financial institutions and the physical cash is used peer-to-peer.
So, when talking about why eNaira when I can access my money digitally? But before that, see how Central Bank access commercial banks money digitally.
However, while cash and reserves are a liability of the central bank, commercial bank deposits are not. This makes eNaira different from the money you have in your bank account, Kuda, OPay and those other types of financial Account.

Reserves are Central Bank money that can be accessed by legal financial institution. This is the type of money available in your bank account. It Is not physical Naira (naira note). Here the difference between eNaira and Reserves.

E-Naira with many advantages and benefits. In Nigeria today, once you have a bank account, you can receive money from any part of the country and access it in a minute. What of does that doesn’t have an account? 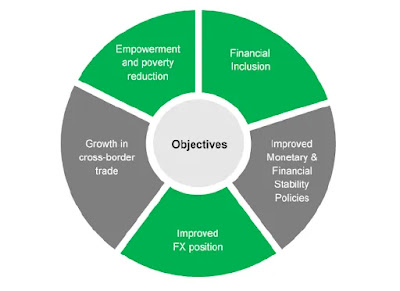 This is where eNaira comes in. With your phone number, you can get an electronic wallet that gives you permission to financial services. Although, getting an eNaira wallet with just a phone number is Limited to daily transactions of N20,000 and account hold up of N150,000.
eNaira, if manage properly can be used for cross-border remittance solution for individual and Businesses based in Nigeria. 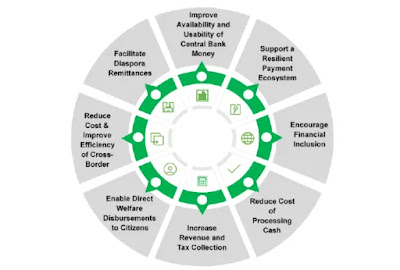 The CBN’s stamp of approval, assumption of liability, and the record immutability of the Distributed Ledger Technology can go a long way to help create confidence around the digital money as a secure means of sending money to Nigeria. The simple technology also means transaction costs will be very attractive.
More Advantages of eNaira are highlighted below

How does eNaira Works?

Here is how the eNaira works. The currency is built on two tier CBDC architecture, which ensure that CBN is not in direct competition with the banks and other financial institution.
The eNaira facilitates mass availability and adoption of the digital money by tapping into the existing payment infrastructure. 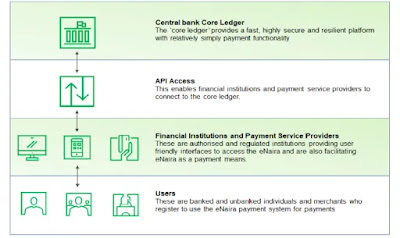 Though the funds still resides at the CBN, the central bank will not be dealing with customers directly. The banks and financial services providers will take up this role. This is why you are required to select a bank when setting up the eNaira wallet app. However, in the long run people without bank accounts will also be able to access eNaira via authorised agents.
eNaira is based on a Blockchain Technology Distributed Ledger powered by enterprise grade Hyperledger Fabric, an open source DLT. This setup ensures a secure, scalable, and customizable platform. Each unit of the new digital currency will have a unique identity and cannot be duplicated or faked.

How to get eNaira?

These information is derived from the Central Bank of Nigeria.

The Merchant Wallet required a company information to open the account. Details like, TIN (Tax Identification Number), BVN and Bank Confirmation.
No daily limit and no cumulative limit in eNaira Merchants account.

The eNaira is the first of it kind in Africa and it was adopted in Nigeria. Providing many Advantages and benefits to the country. Learn more about the new digital currency designed paper here.
Continue
For more interesting football stories, kindly visit our homepage 🏠
Tags
eNaira
Empezy
2
Share
Facebook Twitter Reddit Messenger Messenger WhatsApp Telegram

Square has make CashApp Available for Teen Use

CBN to launch E-Naira in October