According to a recent rumor from France, Lyon is apparently willing to let Arsenal target Bruno Guimaraes depart on loan if one condition is met.

For the midfielder to complete the transition, the Ligue 1 giants want Arsenal to agree to a €45 million (£37.5 million) buy clause in the loan deal.

This is a significant boost for the North London club, as they now have a better chance of landing the intriguing midfielder.

When asked about his future in a recent interview with Globo Esporte, Guimaraes stated that he trusts his agents to make the right decisions for him: ‘It’s common, especially during the timeframe.’

‘When you win an Olympic gold medal and have a fantastic individual season, you’re called up to the national team… Things like these happen all the time in football.

‘I don’t want to think about things too much.’ I delegate more of the problem-solving to my agents.

‘My goal is to get Lyon to where they deserve to be.’ We’re in the Europa League’s round of 16, which is a title that Lyon lacks. Let us put forth a valiant effort to defeat it.’

However, according to other reports, manager Mikel Arteta is already in talks with Juventus about a loan deal for Arthur Melo. 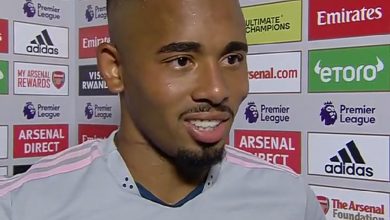