Arsenal’s quest for a Striker this summer continues as their only striking options Alexander Lacazette and Eddie Nketiah will be out of contracts this season.

The Gunners have lined up a host of potential strikers to lead their line next season and unsurprisingly they have once again been linked with Argentine ace Lautaro Martinez, a player they were interested in last summer.

The Argentine was one of the deadliest strikers last season as he formed a very scary partnership with Romelu Lukaku, an alliance that saw Inter Milan clich the Serie A title. 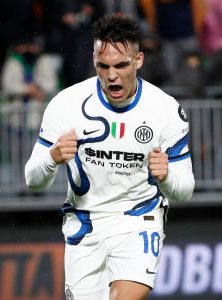 Lautaro Martinez’s contract does not expire until 2026 but  The Sun reports that Inter Milan could be ready to listen to offers for the striker with Arsenal and Manchester City showing interests.

Arsenal will benefit a lot from the 24 years old’s skill set as he has an eye for goal, pacy and energetic one of the qualities needed to make a mark in the Premier league.

VIDEO: Ferran Equalizes for Barcelona With No look Penalty