Arsenal will be looking to sign a new Center Forward in the summer and have reportedly identified Rafael Leao as a potential target.

Arsenal are in dire need of a top class after losing Pierre Emerick Aubameyang to Barcelona and underfiring Eddie Nketiah and Alexander Lacazette leave the club at the end of the current campaign.

It is being understood that the club will be looking to land Chelsea’s on loan striker Armando Broja, a deal that might prove difficult as their London rivals will not be looking to part ways with their talent.

Italian outlets La Republica have reported that the Gunners are keeping an eye for Ac Milan striker Rafael Leao whose style of play has been compared to thay of Thierry Henry. 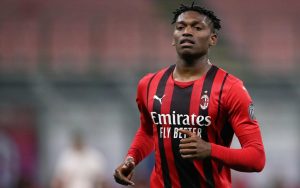 The Portuguese international has found the back of the net 10 times and is been valued at £31.5million according to Transfermarkt.

The 22 year old can play as a center forward and also operate from the wing with most recently Manager Stefano Pioli likening the Portuguese to French legend Thierry Henry.

“I think he has to convince himself and work hard on his head to try to be ambitious. One with his means must think of reaching the top of the world, but talent isn’t enough. He has understood that he has to work in a certain way.”

Video: Bruno Fernandes fires in a cracker to seal the game