The Gabonese left Arsenal during the winter transfer after having a fallout with manager Mikel Arteta has been in exciting form since joining Barcelona scoring one of the four goals in their last win against Athletico Bilbao and also scored at their Europa league clash against Napoli, he has scored 5 goals since joining Barcelona. 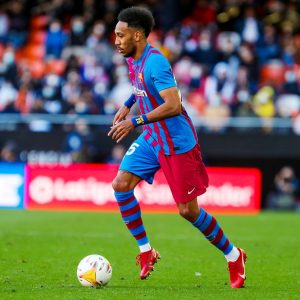 The defender revealed he alongside his teammates wanted Aubameyang to stay at Arsenal but also wished him great exploits with the Spanish giants.

“I don’t want to talk about [the Aubameyang issue,] ” Gabriel told Mundo Deportivo

“Aubameyang is in my heart, we all wanted him at Arsenal. He is something that happened between him and the coaching staff, the other players were not in it.”

“I said goodbye to him before he left, I hope he enjoys Barcelona, he is a very nice person with a big heart and I love him very much.”

Video: Depay ends the game for Barcelona as he fires in the fourth of the game