Arsenal kept their hopes of finishing in a Champions league spot for the first time in five years as they fought back to defeat Wolverhampton Wanderers by 2 goals to 1 in the Emirates. 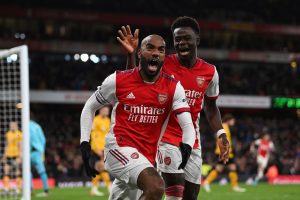 Ruben Neves made comments on how the Gunners celebrated the last time out and he felt the celebrations were over the top, defender Kieran Tierney has responded saying his teammates were well aware of the comments.

Speaking to the Arsenal website he said “Yeah, we would have been for sure. Obviously everyone knows the comments that were made.”

‘So we knew they were going to come out and try to beat us, and get their revenge. But we stood up to that challenge.

‘They had a good start and got the goal they needed and wanted. But after that we controlled most of the game.’

‘It’s a massive win, massive three points. Coming from behind isn’t easy in this league, especially against a team like Wolves.’

‘So we showed character tonight, we showed mentality, and I think we got what we deserved in the end.

‘We never gave up for one second. As I say, a few of us believed we were going to get that goal, most of us believed. I think when you’ve got the belief anything can happen. That showed tonight.’

Arsenal’s win against Wolves saw them leapfrog Westham to fifth with two games in hand.