Arsenal boss Mikel Arteta has hinted that Norwegian playmaker Martin Odeegard could be next in line to be Arsenal’s captain after the former Real Madrid star put in a show against Brentford. 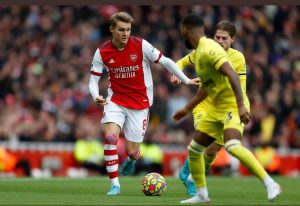 The Arsenal midfielder has cemented his importance at Arsenal after sealing a permanent move to the North London side where he spent an initial 6 months on loan last season.

The Gunners hunt for a Champions league spot continue after securing maximum points against Brentford, a win that saw them edge closer to the top four spot with two games in hand.

“We had a period with him where we could evaluate what Martin could bring to the club,” Mikel Arteta said.

“We had no doubts. The club was brilliant to secure him in a really convincing way. Martin was really happy to join us because he had a really good time, he felt valued, he enjoyed what we are doing, he got a really good connection with the players and the supporters.”

“He wanted to be part of the project. Since then he is getting better and better, and I am not surprised.

“The way he lives his profession, the way he likes to play football and everything he does is to become better”

“He has still a big margin. He wants it probably more than anyone else on that pitch, every single day. He will be top, top.”

With the role of a captain vacant , Mikel Arteta has sent suggestions that the Norwegian could be the next in line to lead the Arsenal line as he said he spoke to Norway’s national team coach Stale Solbakken about his endorsement and credentials.

“He certainly has all the qualities to do that, absolutely,” the Arsenal boss replied when asked if he saw Odegaard as a potential captain.

“Talking to his national team coach and how highly they speak of him. He walks through the corridor and everybody loves him.

“He is such a nice, humble guy and he leads with the way he is. It is very natural for him and that will come.

“He generated expectations when he was 16 as well. Everybody wanted him. And then he had to fulfil that in a club like Madrid where the competition is like it is.”

“It is extremely difficult but now he has found his place. He is really happy here, he has the environment.

“He has the people, he has the time on the pitch to enjoy it and I think that is what he is doing.”

Video: Anthony Elanga seals the game with a beautiful finish