Arsenal have been linked to on loan Nottingham defender Djed Spence who is expected to be on the move to a new club in the Summer. 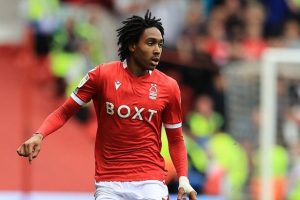 The 21 year old Middlesbrough defender currently on loan to Nottingham Forest has been highly rated as his performance in the FA Cup and Championship has caught the eye of a lot of Managers and Sky Germany has now reported that the North Londoners will face stiff competition from Bayern Munich and Pep Guardiola’s Manchester City.

The £15m defender according to  The Athletic will be highly scouted by a lot of clubs who will need the service of the highly rated star including Manchester United, Tottenham and Leeds.

The Gunners solved their RB position by landing Japanese international Takehiro Tomiyansu but they would need a backup option and the 21 year old seems a credible option.

Bayern Munich has also shown interest in Djed Spence as they look to solve their RB issues and with Middlesbrough setting a modest price tag it is expected that there will be a huge bidding war in the summer.