Arsenal welcome the Reds to the Emirates for what would seem to be one of the toughest test of their resurgence as they take on an in form highly motivated Liverpool side whose eyes are set on the premier league.

The game on Wednesday will be between two teams with different ambitions, while Jurgen Klopp’s team have their eyes set on the league the Gunners are in big contention to secure a spot in the Champions league for the first time in five years.

WATCH NOW/ READ ALSO:  Premier League player tagged "The Future of Arsenal" is in a dilemma of renewing his contract or leaving the club. Will the title hold or will he be "The future" somewhere else? 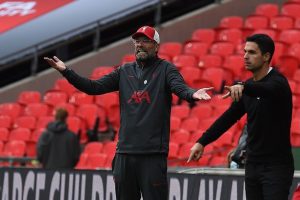 Manager Mikel Arteta admitted to the fact that this clash will be a tough one but also said his team’ will be prepared’ for whatever is thrown at them as he also acknowledged his team are in a good position to secure a top four finish.

“We have put ourselves in a very good position (for top-four),” said the Spaniard. “But there is still a lot to fight for”.

“Now it’s Liverpool and we know how tough it’s going to be. And we have to prepare the game to win it.”

Both teams go into the clash on a run of good form having won their last 5 games, and with Manchester City dropping points against Crystal Palace, the Merseyside team will be all out to secure maximum points and defeat the Gunners at the Emirates.

WATCH NOW/ READ ALSO:  This is How Tuchel Would Line up Dembele in a 3-5-2 and 4-3-3 Formation at Chelsea
URL Copied