Top clubs like Manchester United and Chelsea have been on a race for years in Acquiring the Service of West Ham Defensive Midfielder Declan Rice but his Transfer fee have always been an Issue.

Which manager Wouldn’t want a Technically gifted and diverse defensive midfielder like Declan Rice in his team? Well as your mind rightly said there is non.

The young England and West ham sensation have been in the eye’s of many clubs for years, but the enormous transfer fee placed on him have made clubs consider their plan B options.

The young DM is currently a regular for the three lions of England and also a Captain for West ham despite being very Young. 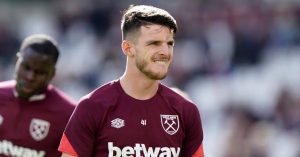 David Moyes made it known to the media when Asked how much it will take for any club to sign Declan Rice as Quoted by Vince on twitter, that it will take the buying club over 150 million euros to sign him.

“If you are interested, well, it will be north of that. One hundred was cheap last summer. One hundred and fifty just now would be minimum but he is not for sale.”

Rice has grown to be that player whose name is among the first to be announced when the starting lineup is made.

Temmybiz Verdict on the price tag

As we all know Declan Rice is one player embedded with legend quality, and despite being so young he has grown into one of the very best DM’s in the premier League.

Even at that there is no way any club would pay 150 million euros for a Defensive Midfielder.

At best the player is Worth nothing less than 60 million euros if we are to be honest with ourselves. As David Moyes rightly said Rice is not for sale as is a core part of their ongoing project at West Ham.