It’s already becoming a normality for Top European celebrities to have broken Relationships. The latest to be on the fronpages of the media is that news of the Thomas Tuchel Breakup with his wife as they are currently separated According to MailOnline. 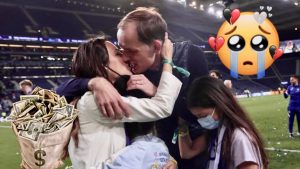 Was it the 4-1 loss against Brentford that got Tuchel so angry to Divorce his wife?

Well he refused to make any comments to the media concerning the issue but one thing for sure is that his wife is set to bank millions of pounds after the divorce happened.

Worrying times to be Chelsea fan. Many questions are currently in the minds of Chelsea fans, Was the divorce what made his tactically weak against Brentford? Because following this news Tuchel is currently a broken man.