Tuchel Chelsea team were disgracefully outclassed by a Sub-par arsenal team that failed to do much on the ball throughout 90 mins.

Chelsea were able the get 5 goals in the 4-2 thriller, although three came as own goals in favour of Arsenal but they were able to get two regular goals for themselves.

Tuchel: “We scored five goals and lost 4-2, it’s easy. Three own goals for us and two regular goals for us, one for Arsenal. This makes 4-2.”

Saka secured the win for arsenal after converting a penalty that Chelsea captain Ceser Azipiculeta gifted arsenal from a reckless pull inside the box.

Despite Chelsea dominating for most part of the Game Thomas Tuchel made some disappointing tactical decisions that affected the outcome of the game. We would be highlighting four tactical mistakes Tuchel made against Arsenal. 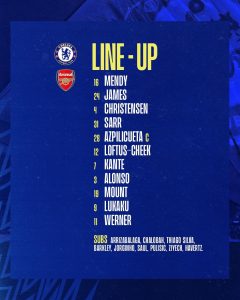 From the team selection it was obvious arsenal had the upper hand in the match. The defense setup showed Chelsea would definitely conceed goals.

How does a Tactically inclined manager field a back three comprising of Sarr, Christensen (A player that’s no longer interested in playing for the club after his pre contract with FC Barcelona) and Recce James (A player who prefers moving forward and you often times forgets about tracking back unless the team are in a defensive phase.

We all agree Arteta doesn’t have the Tactical experience but you don’t try to underrate a manager who has proven times and times again that he can frustrate results from the big names.

Tuchel wing back system against Arsenal was him trying to underrate the attacking intensity arsenal would provide in the game. You won’t see Tactical exceptional manager’s like Pep Guardiola and Jurgen Klopp feature Slow and static players like Ruben Loftus Cheek and Ceser Azipiculeta in the wing back position where they are likely to face the raging pace of Bukayo Saka and Dribbling Poweress of Nuno tavares.

Forcing an Un-form Mendy against an hungry Arsenal

Mendy has visibly lost his form in recent weeks and clearly needs rest! Using Kepa in a match like this where he would try his best to win back Tuchel trust would have been vital to enabling Chelsea turn around the result and possibly win all three points.

Not using Kepa was clearly a tactical flaw Tuchel made.

He clearly isn’t happy with his current team as they are underperforming and currently overachieving so he wants to make the new owners see the wrongs in his team and not get too comfortable with success.

He complained the loss had to do with the pitch According to Nizaar Kinsella of Goal Tuchel says Christensen was subbed off for injury and stayed in for treatment. He goes on to blame the pitch for his mistake, covering him fully, saying the home pitch is a problem in general for Chelsea. “It’s a very, very difficult pitch here. It’s not to our favour.”

WATCH NOW/ READ ALSO:  This is How Tuchel Would Line up Dembele in a 3-5-2 and 4-3-3 Formation at Chelsea
URL Copied