“When the goalkeeper is man-of-the-match, then something is wrong with the opposite team..” Klopp steamed Anger as he responded to the Journalist asking the question forgetting that two weeks back Allison Becker won Man of the Match against Chelsea in the FA cup final. 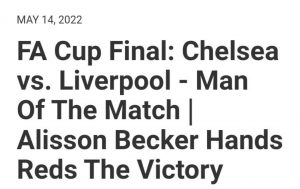 Liverpool Got 9 shots on Goal but Ex Chelsea Goalkeeper Thibault Courtious had it in his mind that the UCL Final in Paris was his night to shine.

Real Madrid sealed the game with only one Shot on goal after playing tactically for the whole of the first half and after scoring the goal.

They made sure to Close down all spaces in their half thereby making the runs of Mane, Salah and Trent ineffective.

🗣️ "When the goalkeeper is man-of-the-match, then something is wrong…"#LFC boss Jurgen Klopp says the Champions League final defeat was 'harsh' on his side 🔴 pic.twitter.com/7IoVA7930Z