21-year-old Frenchman, William Alain André Gabriel Saliba will be staying with Arsenal for a while as news of him leaving has been debunked.

The rising star player who joined Arsenal in 2019 has been on a loan trip and is fully back to the club for good. The French player who chose to play for Arsenal when the English club was in a hot bid for him alongside Tottenham was first loaned out to his previous club Saint-Étienne in 2019.

After helping the club reach the finals of  Coupe de France that very season he came back to Arsenal and was loaned to notable Ligue 1 club Nice in January 2021. July of that same year, he was loaned again to French club Marseille and they succeeded in reaching the semi-finals of the club’s Europa Conference League tournament. 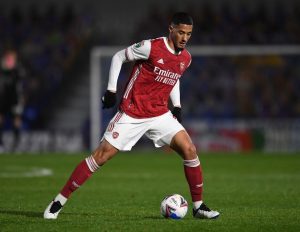 The defender became an important and productive piece of the Marseille team as he was awarded the title of Ligue 1 Young player of the year and included in the Team of the Year squad.

Many European clubs have offered to have the player play for them for another season Marseille inclusive but Arsenal has refused to let the player go and Mikel Arteta has confirmed that the player is staying.

A pay rise and new playing time are said to be included in the player’s new contract extension.