Arsenal who recently just showed interest in Brazilian player Gabriel Jesus has won the race in getting the player to their side for the coming season.

The Gunners who were in the bid for the Manchester City player with other clubs like Tottenham Hotspur, Chelsea and Paris Saint Germain have reached a verbal agreement with the player’s present club Machester City.

Manchester City which initially had the player out for €50 has brought down their offer and is not just willing but ready to sell out the player for €45m.

The Gunners are now in the final stages of getting the deal to be history as they are presently discussing personal terms and medicals with the player and his management.

Gabriel Jesus will be joining Fabio Vieira, Eddie Nketiah, Matt Tuner and fellow Brazilian Marquinhos as the play for Arteta and hopefully have an amazing season. 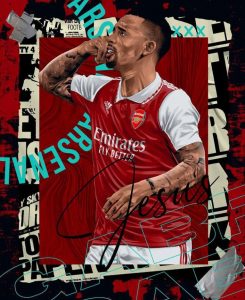