Brazilian Forward Gabriel Fernando de Jesus whose move to Arsenal has been confirmed is presently making plans to come to London this week for his medicals and final contract signings. The 25-year-old player will be coming to play at London Colney as he has agreed to play for The Gunners till 2027 by signing a five-year contract deal. 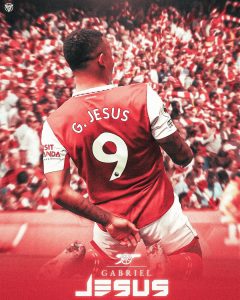 The player’s previous club Manchester City and Arsenal have agreed on a €45m deal as all personal terms and contract negotiations have been agreed upon and approved by the player and his agent Marcello Pettinati. Below is a video of Gabriel Jesus’ pitch dominance and swift moves that had Arteta’s side on Edge