Senegalese-born midfielder Patrick Vieira is one of Arsenal’s greatest players to ever play the club. The French man who started his professional football career at the age of 17 in Cannes was named captain when he was just 19 years old. The player joined Milan in 1995 and move to join Arsenal on a €3.5m deal in 1996. He was known for his aggressive and smart style of play and was named in the Premier League (PFA) Team of the Year for six consecutive years. While playing for the English team Arsenal, they won three league titles and four FA Cups. He then for a short while joined the Italian club Juventus and later moved on to play for Inter Milan. Before retiring in 2011, Vieira played for Manchester City and spent over 12 years playing for the France national team. 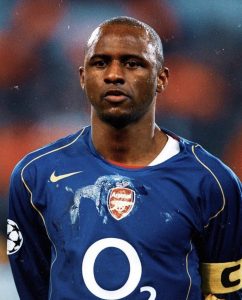 After retiring, Vieria went into coaching and took charge of Manchester City Academy in 2013 before signing for New York City Fc two years later. In 2018 he returned to France to manage the Ligue 1 club Nice and was in 2021 appointed manager of the English football club Crystal Palace. Patrick Vieria was born on the 23rd of June 1976 and is 46 years old today. Happy Birthday to the legendary footballer.

JUST IN: Arsenal has offered €70m for this summer premium commodity player. Is he worth the offer??