AC Milian present forward Olivier Jonathan Giroud was on this very day signed to Arsenal in 2012. Giroud who is considered one of the best players in the world signed a long-term contract deal for £9.6 million and scored his first goal for the club in a 6_1 win against Coventry City. The player then scored his first premier league goal as an equalizer goal in a 3_1 win against West Ham United before giving Theo Walcott a goal assist. The 35-year-old player scored his first UEAF Championship goal for the club in a draw match at Schalke and scored twice in a 3–3 draw match against Fulham football club four days later. 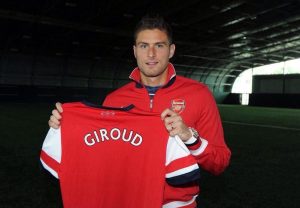 In 2017, the Frenchman renewed his contract with Arsenal and in 2018 signed a new deal with Chelsea where he played for three seasons and moved to this present club AC Milian in 2021 on a 2year contract. Today marks ten years Olivier Giroud became a Gunner and wore the the club proudly.

Barcelona have disclosed the return date for injured Pedri Gonzalez

Arsenal confirm's that rising star Saliba is not for sell and is to resume pre-season training.