Brazilian professional footballer Gabriel Teodoro Martinelli Silva is one of Arsenal’s most skilful and talented players. The 21-year-old made his Arsenal Premier League debut in 2019 in a 1:0 win against Newcastle United as a substitute in the 84th min. The player has gotten a lot of attention from other clubs and their managers but will be staying back with the Gunners as plans of his contract being extended are in motion. 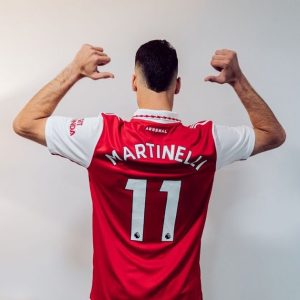 The player who will be wearing the shirt no 11 is set to bring more fire than he did the previous season. During the 2021_2022 season, Martinelli scored a beautiful goal that was ranked 3rd in the official goal of the season poll carried out at the end of the season. Here are some of the best moments for the player as he continues his journey at Arsenal.

Barcelona to loose Midfield General to Manchester United this summer