Arsène Charles Ernest Wenger who is the first Frenchman to manage in the Premier League and the longest-serving Arsenal manager has become a daily tradition for the club and its player. The FIFA’s Chief of Global Football Development has a giant picture of him installed at the entrance of the club’s training centre located in London Colney England. The gigantic picture of him smiling with his hand raised up is the first thing people see when entering as it comfortably hangs from the building ceiling to the floor. The club’s present Manager Mikel Arteta who played under the 72 two years old at the time he was coach has strived to make it a habit for players and individuals to high-five the Installed image every day before entering the training centre. Arteta believes that the singular act and picture being there helps in feeling the presence of the former coach at the training ground and giving the players some sort of idea about the club’s history,how everything started and all Arsène has done for Arsenal. 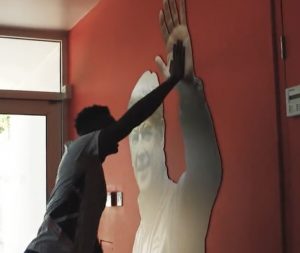 The newest club signing Eddie Nketiah has joined the tradition and was seen giving Wenger a high 5 as he entered the training centre.