Mikel Arteta and Pep Guardiola are in talks again for Manchester City’s outstanding defender. The Gunners after signing Gabriel Jesus this summer transfer window from Manchester City are going for 25-year-old Ukrainian player Oleksandr Volodymyrovych Zinchenko. The player joined Manchester City in 2016 from Russian league club Ufa Fc and might be coming to Arteta’s side as he is now their top priority. Zinchenko will be meeting a familiar face in London Colney as the player worked under Mikel Arteta during his time at Manchester City. 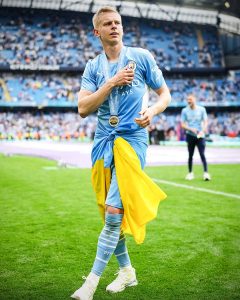 The left-footed player is considered one of the most versatile players in the league as his ability to play as a central midfielder as well as a left-back is commendable and he could cover both positions for the Arsenal team.

Zinchenko renewed his contract with Manchester City in 2019 and is happy playing there but will consider moving to another club if they can offer him a place as a central midfielder which he enjoys playing the most. Arsenal is yet to make an official bid while Manchester City is likely to sell the player if their asking price and requirement are been met.

Arsenal's defender rumoured to be leaving joins them in their pre-season  tour ahead Evertons clash on Sunday. The player will be wearing a new shirt number for the next season

Barcelona keeping a close eye on €50m worth player