Arsenal has sold off one of its midfielders and officially bid him farewell, wishing him all the best as he furthers his professional football career somewhere else. Matteo Elias Kenzo Guendouzi Olié joined Arsenal in 2018 after leaving Fc Lorient where he played for the Lorient first team. He made his premier league debut in a match against Machester City and scored his first professional career and premier league goal in a 3:0 win match against Qarabağ. 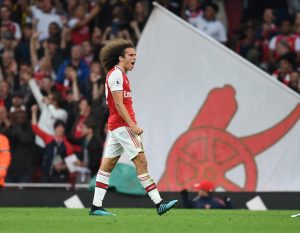 The 23-year-old player was on loan to German professional football club Hertha BSC before moving to Ligue 1 club Marseille on another loan in 2021. Matteo before moving permanently to Marseille became an important piece of the OM team as his personality on and off the pitch took a better turn. The 6ft player has in previous times been known for his bad general conduct, attitude and composure.

While at Arsenal, the young player made a total of 82 appearances within two football seasons and will now continue the good performance he has started at Marseille.

Barcelona Set To Loose French Winger to Chelsea This Summer