Having made no appearance for the Arsenal team since he was bought in 2019 from Saint-Étienne, French professional footballer William Alain André Gabriel Saliba will be joining Arsenal in their pre-season matches as he was seen confidently travelling with other players to the United States. The English club players are travelling to Baltimore in preparation for their next match against Everton on the 17th of July 2022. 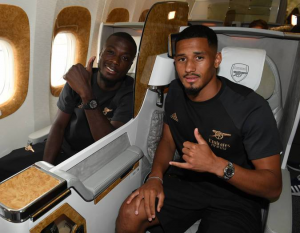 The 21 year old defender who has been loaned out to several club since his signing to Arsenal has been assigned a new shirt number and will be wearing no 2 at the start of the season. Rumors of Saliba leaving the Gunners has been going on for a while, but the Frenchman is not ready to leave the club just yet as his appearance with the other players has confirmed his status.

The player will hopefully make his Arsenal debut on Sunday when The Gunners will be facing Frank Lampard and his boys.

JUST IN: Arsenal and Manchester City are in bed again as Mikel Arteta wants another of City's players. The Gunners are going for the most Versatile player in the Premier League.