Fabrizio Romano who is the most reliable sports journalist, has given a fresh update regarding Barcelona’s pursuit for Sevilla defender Jules Kounde.

Barcelona are now leading in the race and getting closer see to Jules Kounde in a battle with Chelsea. 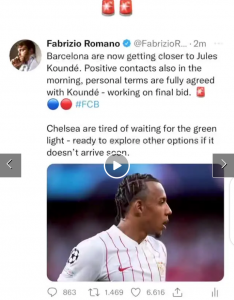 Todd Boehly is set to loose Jules Kounde to Barcelona yet yet again as Sevilla haven’t responded to Chelsea’s £55m offer.

Barcelona are willing to pay £65m as per Mundo Deportivo to Sevilla for Kounde. Barcelona and Kounde have already reached an agreement concerning personal terms. All that is left is for Barcelona and Sevilla to reach an agreement.

Kounde is expected to team up with Ronald Araujo as his long-term partner.