Arsenal has decided to sell out one of its players after spending over £100million this summer on purchasing new players for the club. This sudden sale is coming up after their 4:0 win against Chelsea on Saturday in a pre-season friendly match and a few days before the commencement of the new season.

30-year-old professional footballer Bernd Leno has been in talks with English professional club Fulham and might be leaving the Gunners as soon as possible. Arsenal has placed the value of the German goalkeeper to be around £10 million but has been asked by the player to lower their asking price so he can make the move. 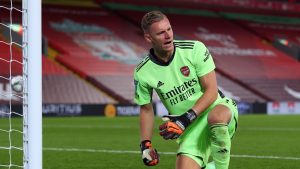 Arteta’s side after serious deliberation has brought down its demand to around £8 million as talk with Fulham is still ongoing but nothing has been concluded. Fulham Fc is also considering going for Barcelona’s Brazilian player Norberto Murara Neto and might be the only top club gunning for the two goalkeepers.

Bernd Leno joined Arsenal in 2019 and has so far made 125 appearances for the club. The player became a backup keeper and was hardly seen on the pitch during the 2021/2022 season after the club bought English player, Aaron Ramsdale and made him the official starting goalkeeper of the team.