After keeping everyone in suspense about who will be wearing the club’s captain armband, the Arsenal boss has appointed and announced his choice. The announcement came before the club faced Spanish professional football team Sevilla at the Emirates Stadium and won.

Several players in the club were considered for the position but at the end of the day, Norwegian attacking midfielder Martin Ødegaard was appointed captain. The new captain joined Arsenal last year on a four-year-old valid deal after playing on loan from former Spanish side Real Madrid. 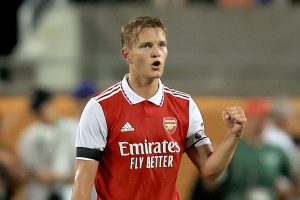 He was appointed captain of the Norwegian national team in march 2021 and has worn the skipper armband on few occasions before being officially appointed by the Arsenal Boss. Ødegaard has made a total of 60 appearances for Arsenal and has scored 9 goals only.

In his first interview as captain of the club, he said it is a big moment for him as he is proud to captain the fantastic club. He went on to express his gratitude saying it’s a big achievement being the captain and appreciates being trusted with such a responsibility.

VIDEO: Watch as Dembele Opens the Scores Like it's Nothing