20 years old professional English player Bukayo Ayoyinka T. M. Saka is one of Arsenal’s most prized and promising players. The forward who started with Arsenal at the age of 8 from Arsenal’s Hale End Academy, is planning on renewing his contract with the club and extending his stay.

Saka’s contract extension has always been a top priority for Arsenal as Arteta is not ready to let the player go no matter what and is presently discussing and negotiating personal terms and salary raise with the youngster’s agent. 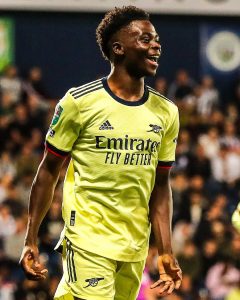 The no 7 player was Arsenal’s Player of the Season for two consecutive seasons and is currently the target of other clubs within and outside the Premier League. Manchester City has identified him as their major target in replacing their star player Raheem Sterling who was sold to Chelsea a short while ago.

Bukayo Saka has so far made a total of 132 game appearances and has scored 24 goals for the club including the ending goal for Saturday’s match against Everton. He is happy playing for his boyhood club and is excited about their project. Signing a contract extension for him is like signing a whole new player for the club and as such Arsenal is pressing hard to get this over with as soon as possible because he is one of the best young footballers in the world and also considered to be the future star of the Club.

VIDEO: Watch Mikel Arteta's Interview after their win match on Saturday. Even tho they won he confirmed that they were struggling!

SURPRISING!!! How Pierre-Emerick Aubameyang was able to score from a 30 yard distance that passed through five defenders 😯😯