31-year-old professional French footballer Alexandre Lacazette is one of the players you can’t put a specific position to as he is a beast on the pitch and can cover a variety of positions. The player began his professional career at the age of 19 and represented his country from 2006 going through all the youth levels of the nation’s competition. Lacazette started off playing for Lyons’s Under 18 division before playing for the first team in 2010. The player performed brilliantly and drew the attention of the media, other players, coaches as well as other clubs to him. In 2017, Lacazette joined Arsenal on a heavy deal and made his first appearance for the team that same year in a match against Chelsea. The player together with the likes of Mesut Özil and Pierre-Emerick Aubameyang created wonderful moments that will always go down in the clubs’ history and fond memories. He is a stylish and happy player who had interesting dance moves and wanted to share them with everyone after scoring a goal as that was part of his celebration routine. 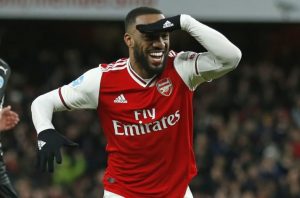 Alexandre Lacazette after spending four solid years with Arsenal left the club when his contract expired in June 2022. The talented showman returned to his first football home Lyon, signing a three-year-old contract with the French Ligue 1 professional football club. Below are some of the players’ favourite moments at Arsenal.