English professional football club Arsenal is not leaving any stone unturned this season as the club is in the market to get and buy the best of the best players. The male football squad have spent over £100million in acquiring New players this season and the female squad is following right behind.

After welcoming some of their female UEFA Women’s Champions back to London Colney, the club has unveiled their newest squad member. 26 years old Swedish professional footballer Lina Mona Andréa Hurtig left Serie A champions Juventus to join Arsenal on a permanent transfer deal. 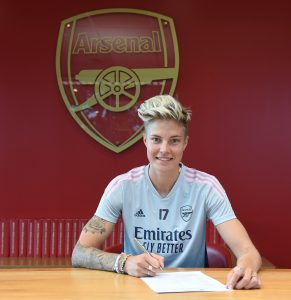 The forward said “It feels so great, I’m very happy to be here. I’ve always, always wanted to play in England and I’ve always been interested in English football so it’s super exciting for me to be here. I know Arsenal are a great club, with great players and lots of quality, so I think I will enjoy it here.”

WATCH NOW/ READ ALSO:  VIDEO: Selfish Play from Nketiah Costs Saka Chance to Pull a Goal back For Arsenal
CHECK THESE OUT

The Swedish player who plays for the Swedish national team won two Italian Super Cups, two league titles and one Coppa Italia while playing for Juventus. Fellow players and coaches have expressed their thrill with the signing of the new player and are hoping she adds experience, quality and skill to their squad.