Considered one of the greatest of all time is former French professional footballer Thierry Daniel Henry. The present Belgium national team assistant coach is no doubt a bunch of many talents and naturally skilful. The football star started his professional career at Monaco before moving to play for Arsenal in 1999. 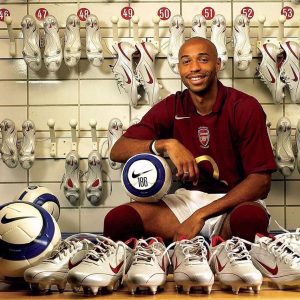 With the player on board at Arsenal, the club won several titles including the Premier League and FA Cup. He also has been awarded many individual titles such as the FIFA World Player of the Year and PFA Players’ Player of the Year. Thierry Henry made a total of 370 appearances for Arsenal and scored 226 in his time before moving to Spanish club Barcelona in 2007.

He was born on the 17th of August 1977 and is 45 years old today. To celebrate him, below is a clip of the remarkable moment Thierry Henry created and added to the game.